You are the owner of this article.
Edit Article Add New Article
Home
News
Sports
Obituaries
Editorial
Marketplace
Business Directory
Things to Do
About Us
NEWSLETTERS
Share This
1 of 2 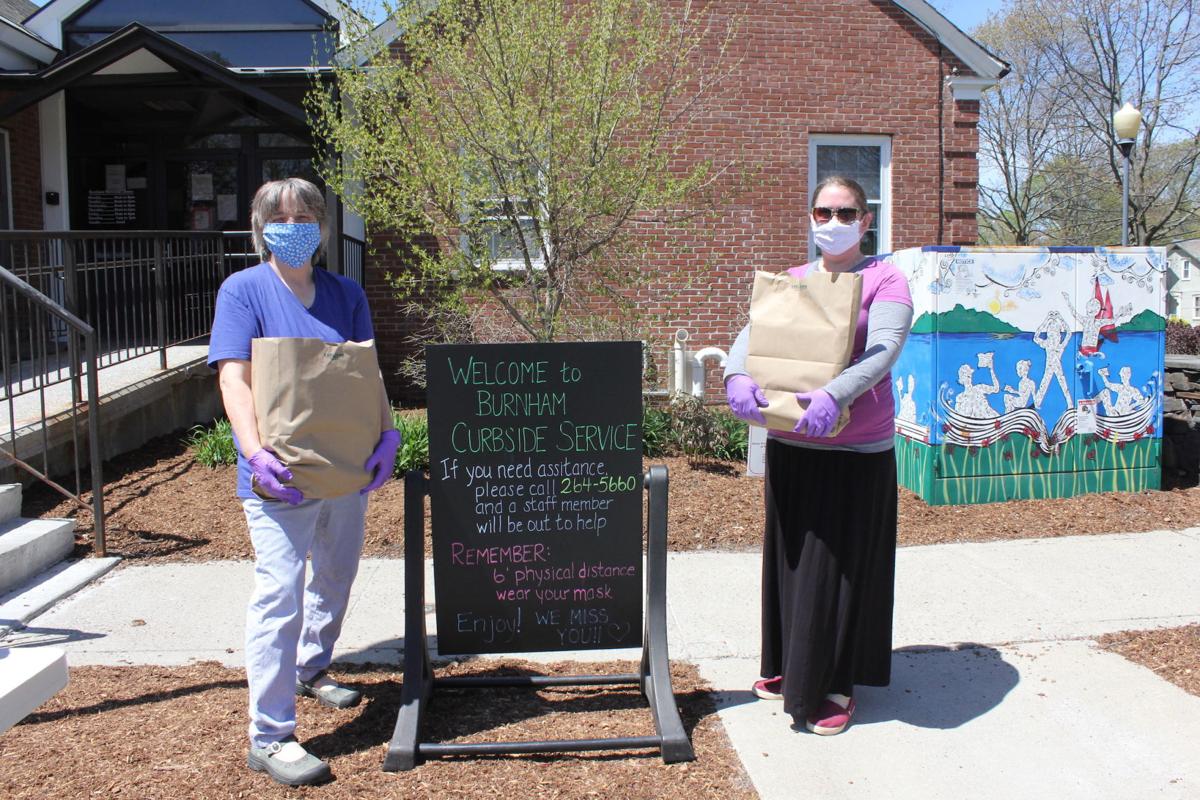 Burnham Memorial Library Director Kelly McCagg (right) and Youth Services Librarian/Assistant Director Hannah Peacock (left) organized curbside book pick-up after being closed since March. They are the only library staff not on furlough. 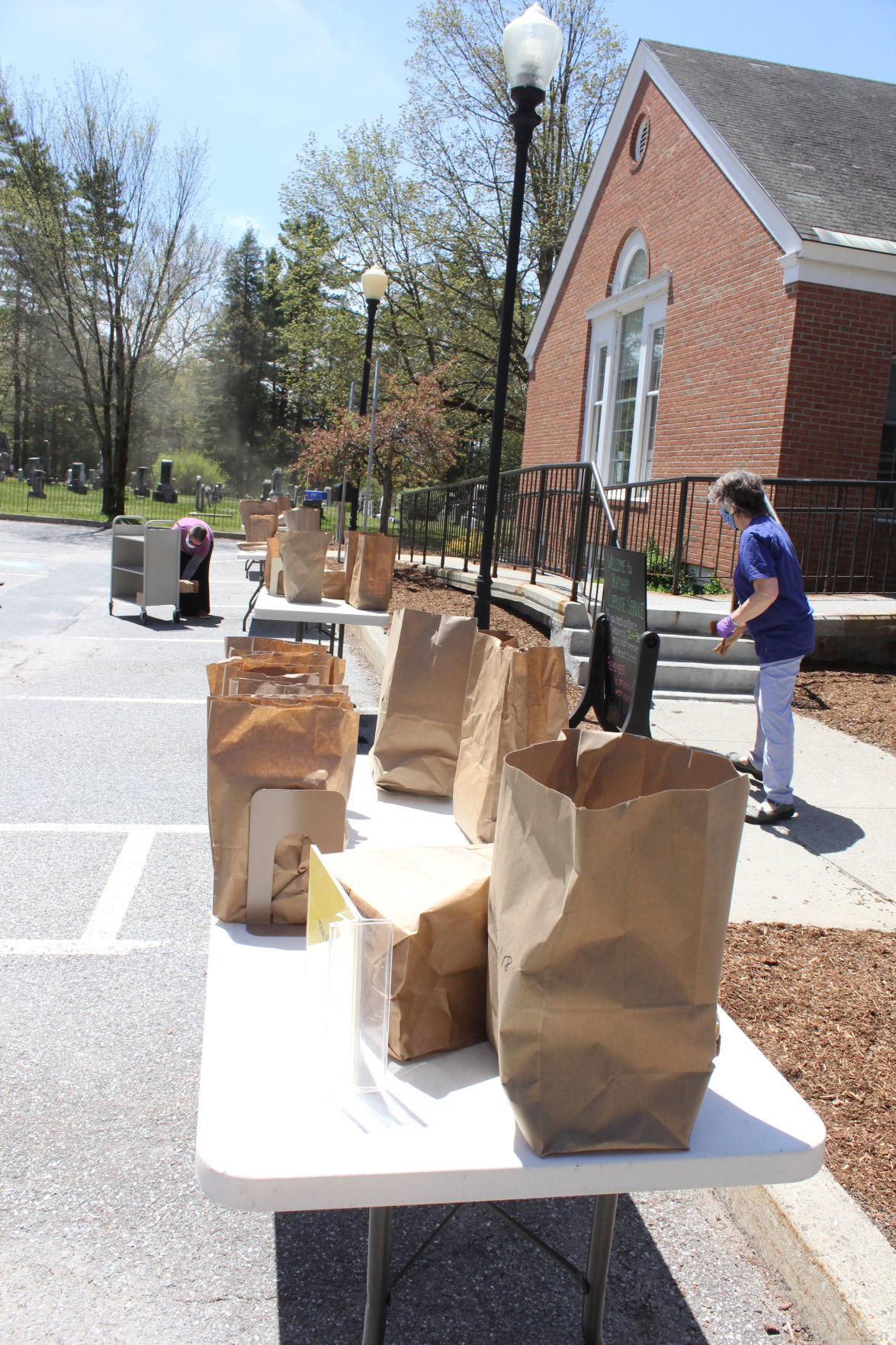 Brown bags containing residents' book requests are organized on tables outside of the Burnham Memorial Library, ready for curbside pick-up.

Burnham Memorial Library Director Kelly McCagg (right) and Youth Services Librarian/Assistant Director Hannah Peacock (left) organized curbside book pick-up after being closed since March. They are the only library staff not on furlough.

Brown bags containing residents' book requests are organized on tables outside of the Burnham Memorial Library, ready for curbside pick-up.

Cars pulled into the Burnham Memorial Library parking lot intermittently throughout the day. Each stayed a few minutes, just long enough for masked drivers to jump out, peruse brown paper bags containing books and marked with names, wave to the two library staff from six feet away, and leave with their treasure.

The library has been closed for in-person operations since March 18 as concerns over the rapid spread of COVID-19 grew. But on May 16, nearly two months later, Burnham began offering curbside pick-up services on Saturdays from 10 a.m. to 12 p.m. and Tuesdays from 1 p.m. to 4 p.m.

The first day curbside launched, 83 patrons stopped by to retrieve books and 245 items were checked-out in total.

McCagg remembered the first day as dreary outside; she and Hannah Peacock, Assistant Director and Youth Services Librarian, were nervous that an onset of rain would chase them and the books inside the building. But "in the end, we didn't have to move the service into the vestibule on account of the weather, and we had dozens of patrons happy to return to the library," recalled McCagg.

She and Peacock are the only two library staff still working—everyone else has been furloughed due to revenue concerns regarding the financial fallout of COVID-19.

"Uncertainty," said McCagg, when asked what one of the biggest challenges has been for her and the library during the pandemic. "Along with the other Town department heads, we have a thorough overall emergency management plan, and more specific department plans in advance of this particular situation, but it still evolves quickly," she said.

Since closure of in-person operations, library staff ramped up their virtual collection, pushing e-books, audiobooks, video recordings of story time, and more to the community. According to McCagg, during the month of April, e-books usage increased by 50 percent and audiobook usage increased by 21 percent over the prior 11 month average.

McCagg also noted many patrons have been trying the digital library for the first time. "I spent close to 30 minutes on the phone with an 84-year-old woman, helping her check-out and download an e-book to her kindle," recalled McCagg. "She was very appreciative for the assistance, as most people are."

But while virtual library use has climbed quickly, McCagg said the staff wanted to resume physical lending as soon as it was safe. Starting curbside service was a top priority.

"We took into consideration what we had learned about COVID-19 transmission as well as Town and State information and training to ensure that staff and patrons were as safe as possible, while still allowing for the sharing of physical items," she explained.

With two days of curbside pick-up now under her belt, McCagg said she's heard from patrons that they are grateful for the resumption of physical lending and that they miss seeing their librarians in person. For McCagg, her sentiments ring similarly.

"I miss seeing our regulars. We spent some of our time calling to check in on those people we knew lived alone or were elderly. Many people come to the library for social interaction. When we closed our doors, they lose that opportunity. I also miss the kids. Hearing a child scream because they don't want to leave the library, always makes me smile," said McCagg.