Thank you for your service. 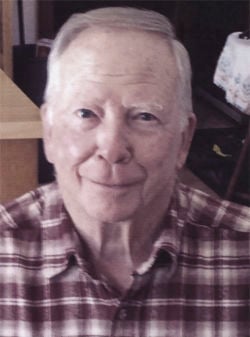 Harry Sommers Koonz, Jr. passed away on March 8, 2020 at McClure Miller Respite House in Colchester, Vt. Harry was born on March 13, 1934 in Greenfield, Mass. He was the sixth child of the late Harry and Catherine (Edes) Koonz.

He was a 1952 graduate of Greenfield High School. Harry was proud to be an honorably discharged Air Force Veteran and a lifetime member of the Veterans of Foreign Wars and the Disabled American Veterans. Following his Air Force service Harry began a career with the United States Postal Service serving as clerk and eventually as a postmaster in Burlington, Vt. Harry was extremely proud of the fact that he retired from both careers on February 29th, commencing in 45+ years of Federal Service.

Harry married the love of his life, Lois Young, in the Cathedral of Immaculate Conception in Burlington on July 30, 1955. She predeceased him after 40 years of marriage on February 13, 1996.

He is survived by his four children, Denise Burney of Burlington, Theresa Bither of Burlington, Glenn Koonz of Colchester and Curt Koonz and his wife, Tina, of Waterville. His grandchildren, Mark Burney and his wife Lori, Leslie Burney, Jessica and her husband Jason Opalenik, Keith Sampere, Lauralee and her husband Matt Gagnon, Zowie, Paige, David and Laura Koonz, Daniel and Danielle Koonz, Douglas Koonz and his partner Samantha McWherter, Bethany and her husband Ryan Renaud, Christopher, Jacob and Ben Koonz. He is also survived by several great-grandchildren, his sisters-in-law Stephanie Koonz, of Alaska, Phyllis L’Esperance of Burlington and Lucille Ahern of Keene, N.H., his brother-in-law Louis Young and wife Mary of Hinesburg and many nieces, nephews and friends that he held so dear.

Harry loved spending time with family and friends. His passion was exercising through bike riding, bowling, tennis and volleyball. He was a fan of the Red Sox and the New England Patriots.

He was predeceased by his son, Wayne David Koonz, sisters Elinor Ristuccia (Ben), Phloise Collins (Don), and Rae Hill (Russell). Also by his brothers, Earl Koonz, who died at sea during WWII, and Louis Koonz, as well as his in-laws Louis and Helen (McIntier) Young, Leo L’Esperance and Daniel Ahern.

The family would like to thank the many loving, caring and compassionate individuals we encountered during the nearly four years at Fanny Allen Campus Rehab, Baird 4, and the McClure Miller Respite House.