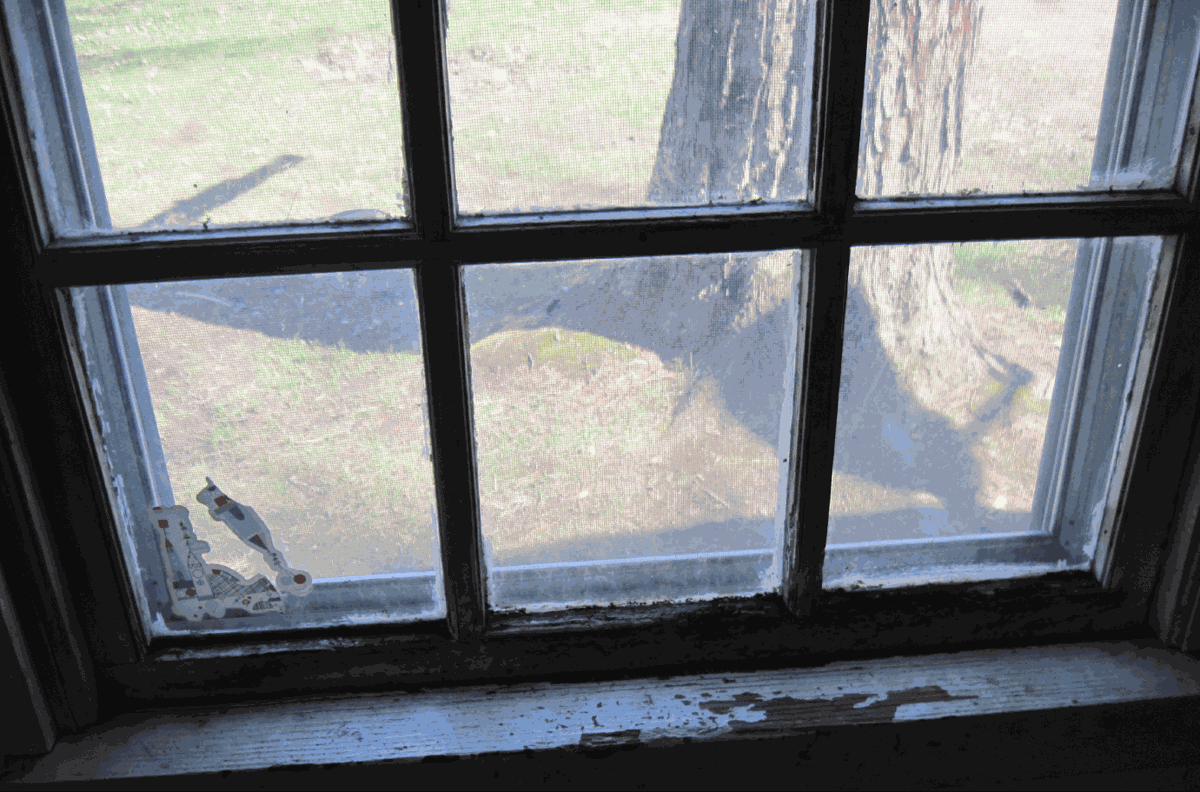 One of the cabin windows at Sharrow Circle was discovered moldy and rotting. The bedroom belongs to a five-year-old child, per the public health officer. (Courtesy Photo) 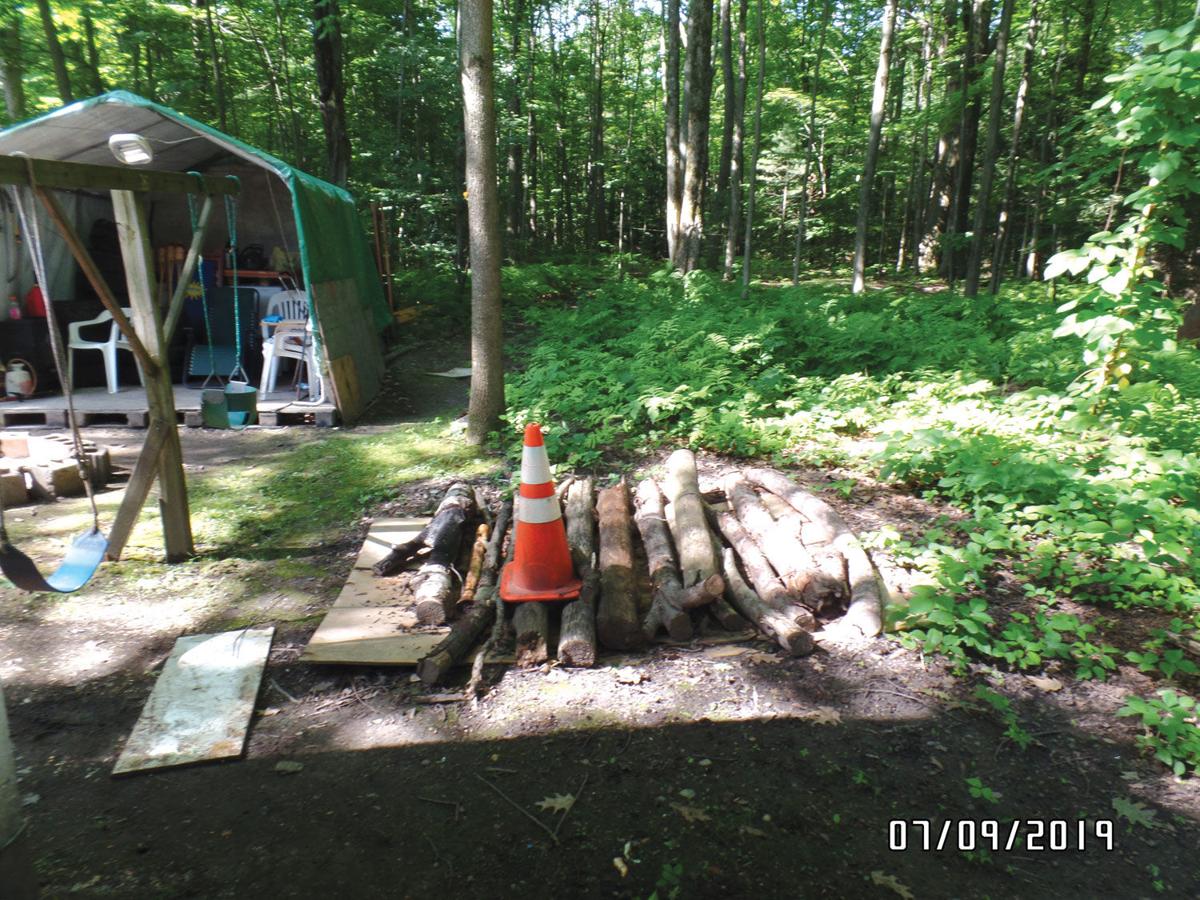 Last March, a resident of Sharrow Circle fell into a decrepit septic tank behind her house. Despite telling Joseph Handy, the only repair she’s seen was an orange traffic cone placed on top of the exposed septic. (Courtesy Photo)

One of the cabin windows at Sharrow Circle was discovered moldy and rotting. The bedroom belongs to a five-year-old child, per the public health officer. (Courtesy Photo)

Last March, a resident of Sharrow Circle fell into a decrepit septic tank behind her house. Despite telling Joseph Handy, the only repair she’s seen was an orange traffic cone placed on top of the exposed septic. (Courtesy Photo)

Anna and her boyfriend are saving up for a little slice of land, big enough to build their dream house on, where they can grow a vegetable garden. They dream of a wide, open patio and maybe having kids someday.

When the couple moved into one of the cabins at Sharrow Circle in Colchester, Vt., last year, they hoped to start a vegetable garden. Instead, the residents’ home is now one of seven units at Sharrow Circle included in an Emergency Health Order issued by the town public health officer.

The Sun granted Anna anonymity, as she cited fear of retaliation or eviction; her name has been changed for these purposes.

According to the inspection report, town officials found mold creeping up walls, bathroom ceilings caved in, broken ovens and thermostats, stoves that give off electrical shocks, and broken septic tanks, among other major health risks.

The town selectboard held a hearing on July 9 last week to give Sisters and Brothers Investment Group, which manages Sharrow Circle, an opportunity to present evidence against the order. Despite having pushed the hearing back twice from its original date on May 28, no representative from the company showed up.

“Once we started going through the cabins, the tenants started telling us all of the deficiencies,” said Johnson-Terk at the hearing. According to her, Joseph Handy of Sisters and Brothers Investment Group and the sprawling Handy empire, was present during the inspection and aware of what needed maintenance.

When the selectboard asked if Handy had posed any questions to tenants during the inspection, Johnson-Terk answered that any queries to residents were mostly posed by herself and Fire Marshal Boyd; Handy remained quiet.

Anna told the Sun that Handy is difficult to get ahold of and that when she does get through, her concerns remain unanswered.

When the couple first moved in, their furnace had no thermostat. “It took 10 months to get that stupid piece of plastic,” said Anna. “We’ve tried to make it as much of a home as we can. But Joe keeps pushing back.”

Last March, Anna fell into a pit behind the cabin.

“It felt like quicksand,” she said, recalling that she had to throw out her clothes and sneakers. Her boyfriend grabbed a shovel to see how deep the hole was, nearly submerging it before touching bottom. According to Anna, they told Handy about the hole but nothing happened. Instead, the residents found some logs and laid them over the hole as a makeshift cover.

After Anna disclosed the hole to Johnson-Terk during the inspection in April, the public health officer found out that the hole behind Anna’s cabin was actually an exposed septic tank.

Between the April inspection and the hearing last week, the septic has been pumped and drained, but the logs remain as a cover. The only new addition is an orange traffic cone placed on top.

In a letter addressed to Joseph Handy sent with the health order, Johnson-Terk states that Handy has until September 1 to bring the property into compliance. Sisters and Brothers Investment Group faces possible condemnation of properties and civic penalties of up to $10,000 per violation for each day that the violation continues, according to the health order.

Director of Planning and Zoning Sarah Hadd, also present at the hearing, said there is not much else the town can do under current state regulations. She recalled only one other incidence when someone did not comply with a health order.

The next step would be to go to court, meaning months of legal back and forth with no guarantee of relief for residents of Sharrow Circle.

At the hearing, selectboard member Herb Downing asked what took priority as the worst threat to public health.

“I would say that the exposure of the septic tank would be primary concern. Immediately following would be all of the mold. They’re running neck to neck,” replied Johnson-Terk. She displayed images taken at some of the properties, pausing on one that showed mold covering a wall and window frame to note that the bedroom belonged to a five-year-old child.

“It is worth noting the number of requests for action received over numerous years,” added Derek Shephardson, Deputy Health Officer. “It’s a rather perpetual situation. [Mr. Handy] doesn’t do any maintenance, that’s what it really comes down to.”

Some of the damage is in part due to little to no foundation under any of the cabins. “They were seasonal cabins for most of their existence, and they’re not constructed for year-round use; they haven’t been repaired properly,” Johnson-Terk told the selectboard. “They’re just not meant to be occupied as year round structures and they’re not being maintained.”

According to Shephardson, mold in the cabins is growing because the houses are sinking into the ground. “There’s one you can see visibly sitting in water,” Johnson-Terk agreed.

Joseph Handy has not replied to the Sun’s request for comment.

Anna and her boyfriend pay $900 per month for a one bedroom, one bath cabin, with a small combined kitchen and living space.

The couple wanted to live in Sharrow Circle due to how much storage space it offered and how many pets they own—four cats, two hamsters, and one snake named Bobo.

“I think the reason why we folded on so many of the issues was because of our animals,” Anna recalled when she and her boyfriend were house hunting. Before moving, the two lived with Anna’s mom in Breezy Acres Trailer Park for five years.

“Four people in a single wide, two bedroom trailer, plus all of our animals?” Anna laughed. “Just not big enough.”

She has not talked much to her neighbors about the maintenance problems at Sharrow Circle, and not so much to the town either. “We wouldn’t dare to sue or take other action,” she told the Sun, mostly for fear of being evicted. “Losing $900 out of [Joe’s] pocket means nothing to him.”

But to Anna and the other tenants, this forces them to function at a disadvantage–caught in between dangerous living conditions and the fear of losing their homes.

She can’t move back to her mom’s trailer and she doesn’t have the luxury of gambling away her savings on a lawsuit with no end in sight. Instead, she’s forced to weigh the cost of living.