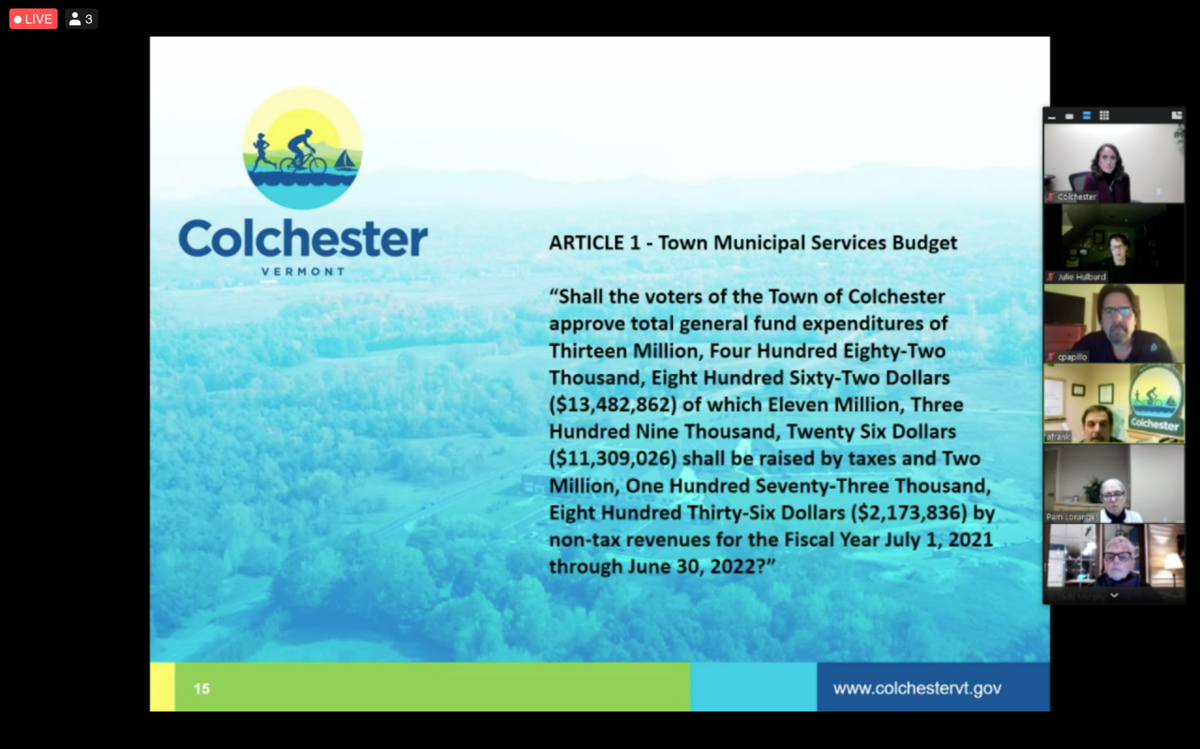 Town Manager Aaron Frank presents to the selectboard the question that will be posed to voters March 2 about the municipal services budget.

Though no members of the public called in to ask questions or offer feedback, at least three people were watching the livestream on LCATV.

The board subsequently approved both plans, sending them to the Town Meeting Day ballot to be voted on by the public on March 2.

Here are the two most notable takeaways from the meeting.

1.  The municipal service budget approved unanimously by the selectboard will increase property taxes by 2%.

“I believe this is one of the best municipal budgets we’ve had in some time,” Vice Chair Tom Mulcahy said, referencing the relatively limited change.

During the public presentation, Town Manager Aaron Frank said that this year, FY 21, Colchester has the third lowest taxes per resident among the seven inner Chittenden County communities.

Read more about the FY 22 budget.

The Capital Safety Plan funds the specialized equipment needs for the Colchester Rescue, Technical Rescue and Police Departments. It needs to be approved every five years by voters. It was last approved in 2016.

Equipment paid for by this plan includes items like cardiac monitors and defibrillators, radios and communication equipment, search cameras and police boats.

For the owner of a $300,000 home, this plan would cost approximately $4.15 a year for the next five years. The previous five years of funding cost the same homeowner approximately $2.53 a year.

This increase stems from an increase in demand, meaning as the town grows in population size, so must its rescue and police departments.

“We see about a 1% increase in town growth every year,” Frank said.

Here’s what else you need to know.

The board approved an amendment that will allow the Colchester Police Department to enforce traffic laws on the newly built, Vicenza Way.

Vicenza Way is a new, a 0.8 mile roadway that services about 12 residential homes, Town Engineer Amanda Clayton said during the meeting.

The street intersects with Windemere Way, located north of the Winooski River.

CPD will now be able to enforce the street’s 25 miles-per-hour speed limit, it’s stop sign and no parking designations on both sides of the roadway.

The board moved to support Vermont Fish and Wildlife’s acquisition of a 61-acre parcel of land currently owned by Vermont Gas Systems.

The parcel includes approximately 47.5 acres of forested area and 15.2 acres of non-forested natural or naturalized area, according to a Dec. 16 memo from Catherine Gjessing, general counsel to Fish and Wildlife to the selectboard.

Fish and Wildlife will continue to allow all non-motorized recreational uses on the property.