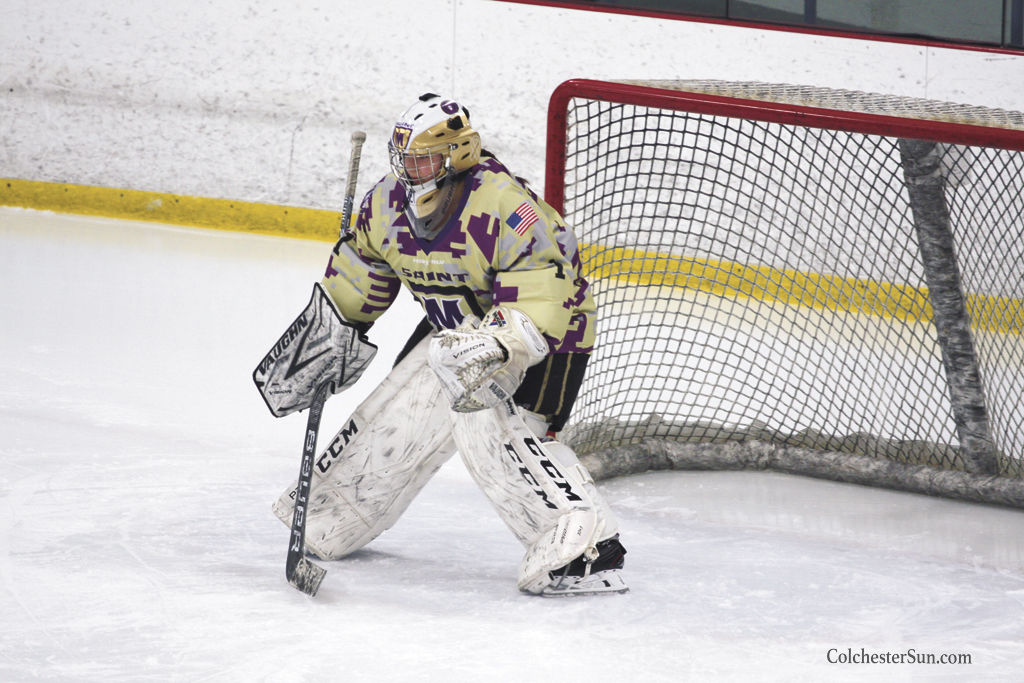 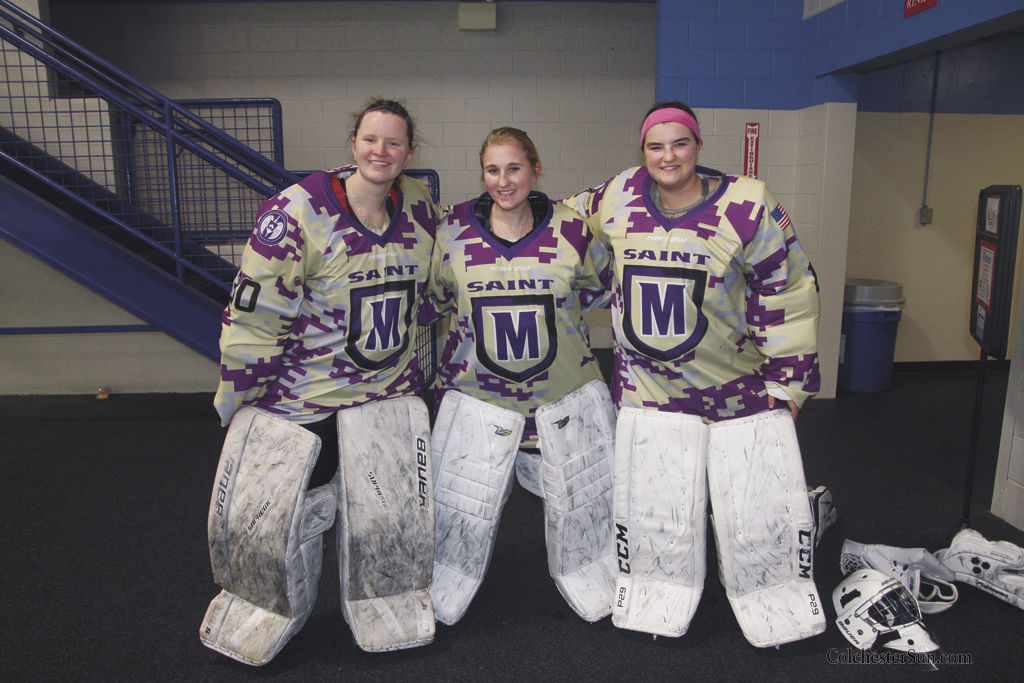 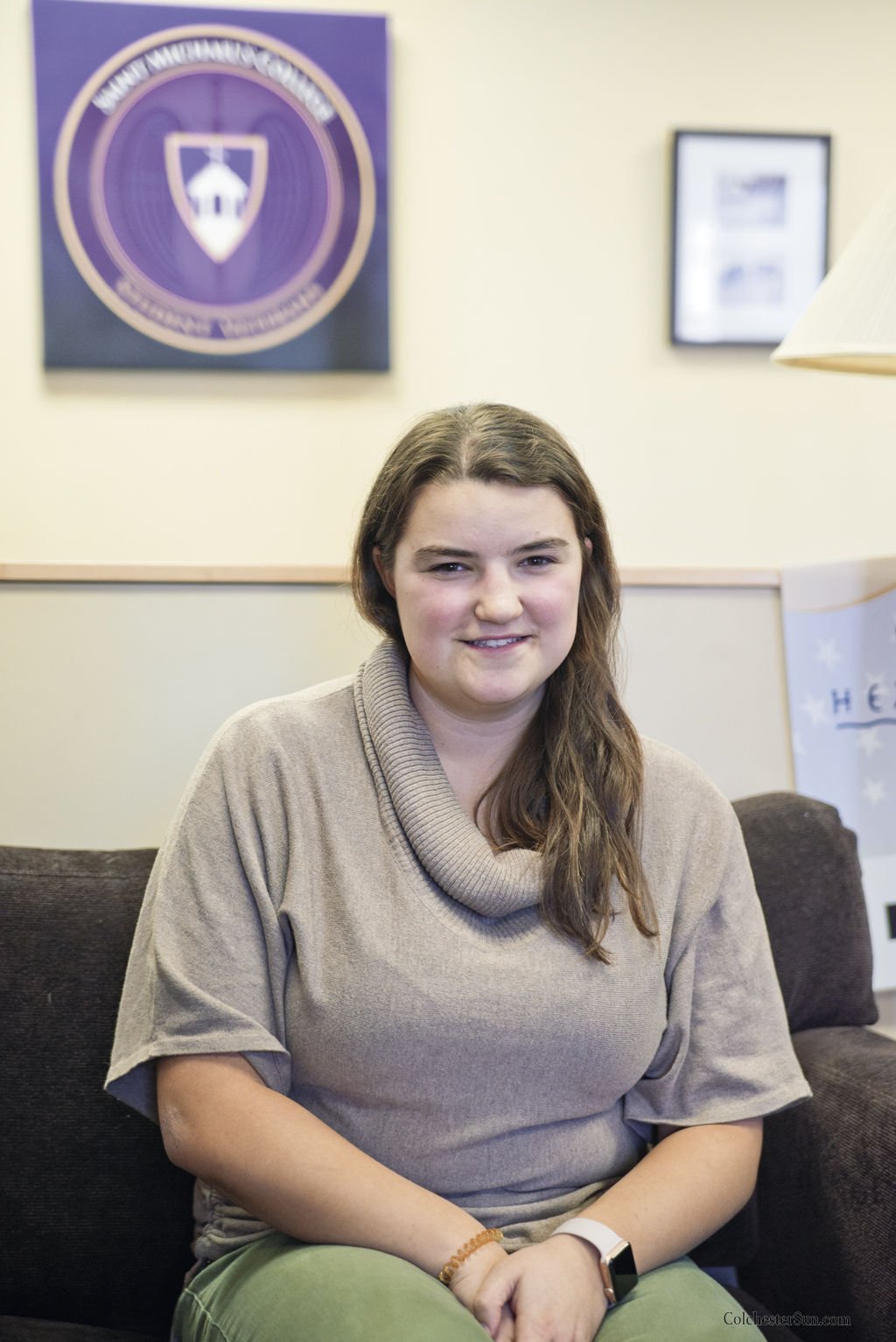 Organized by Colchester resident and Rice Memorial alum Nicole Talcott, the military appreciation weekend was a show of support for current and former military members. While the Saturday match was canceled due to the snowstorm, the Friday night game was still a success, with community partners and residents braving the weather to attend the match.

The SMC senior goalie said the games were also a chance for her club, the Student Veterans Association, to raise money for its military community assistance fund for local and student veterans.

“Whether it’s for the government shutdown and they’re not getting their checks, we’ll help them pay their rent for the month or if they need grocery money,” Talcott said.

Ken O’Connell, coordinator of student veteran services on campus, said the fund initially helped the SVA send care packages to the Canal Street Veterans Housing project in Winooski. The group then expanded to other forms of assistance, including a scholarship for SVA students and veterans.

Talcott said the scholarship has paid for students to accompany O’Connell to the national SVA conference where students get facetime with recruiters. There’s potential for interviews and even job offers.

“I thought about applying, but I’d much rather have the student veterans go because it’s more about them. It sets up a lot of career networking opportunities,” Talcott explained. “It’s more about setting them up for the future.”

She said she’s excited about the new hub of the SVA, a building that used to house the school’s career center, which the club just settled into just several years ago. She said having a space for veterans, active duty and military kids like herself, to study or just relax has made life easier at school.

“My freshman and sophomore years in between classes I would just go to the library because I don’t live on campus, and sit by myself,” she said. “It’s so different coming here, because I always know someone who’s going to be here. It’s like having a family.”

Talcott has been involved with the SVA since her freshman year when a senior on the hockey team introduced the group to her. Talcott’s mother is retired from the Air Guard, but her father still serves in the military. He was deployed to Puerto Rico and missed the military appreciation game and Talcott’s senior game this upcoming weekend.

“I had him in the back of my mind [for the military game] … I was hoping he wouldn’t have to miss this one,” she said. “Everything that we were doing, I was either thinking of my father or … our student veterans here.”

When her dad is in the stands, however, Talcott is inspired to play her best. Before he was deployed, he saw her put up 50 saves against Sacred Heart University, which has the fourth-best scoring offense in Division I women’s hockey.

“It was a little overwhelming emotionally,” she said. “I always play for my dad, so there were a few points in the game where I started tearing up. I had to remind myself the game was still going on.”

Talcott said her parents’ military service has always inspired her to get involved in similar pursuits, including the SVA. This semester she started interning with the Colchester Police Department, where she hopes to work after graduation.

Recently, Talcott said she started to compare the dynamics of her hockey team and that of police officers.

“I think there’s something about having a team that’s very appealing to me,” she explained. “And in law enforcement, in Colchester specifically, it’s such a team and family atmosphere … which is something that’s very different from a lot of other agencies.”