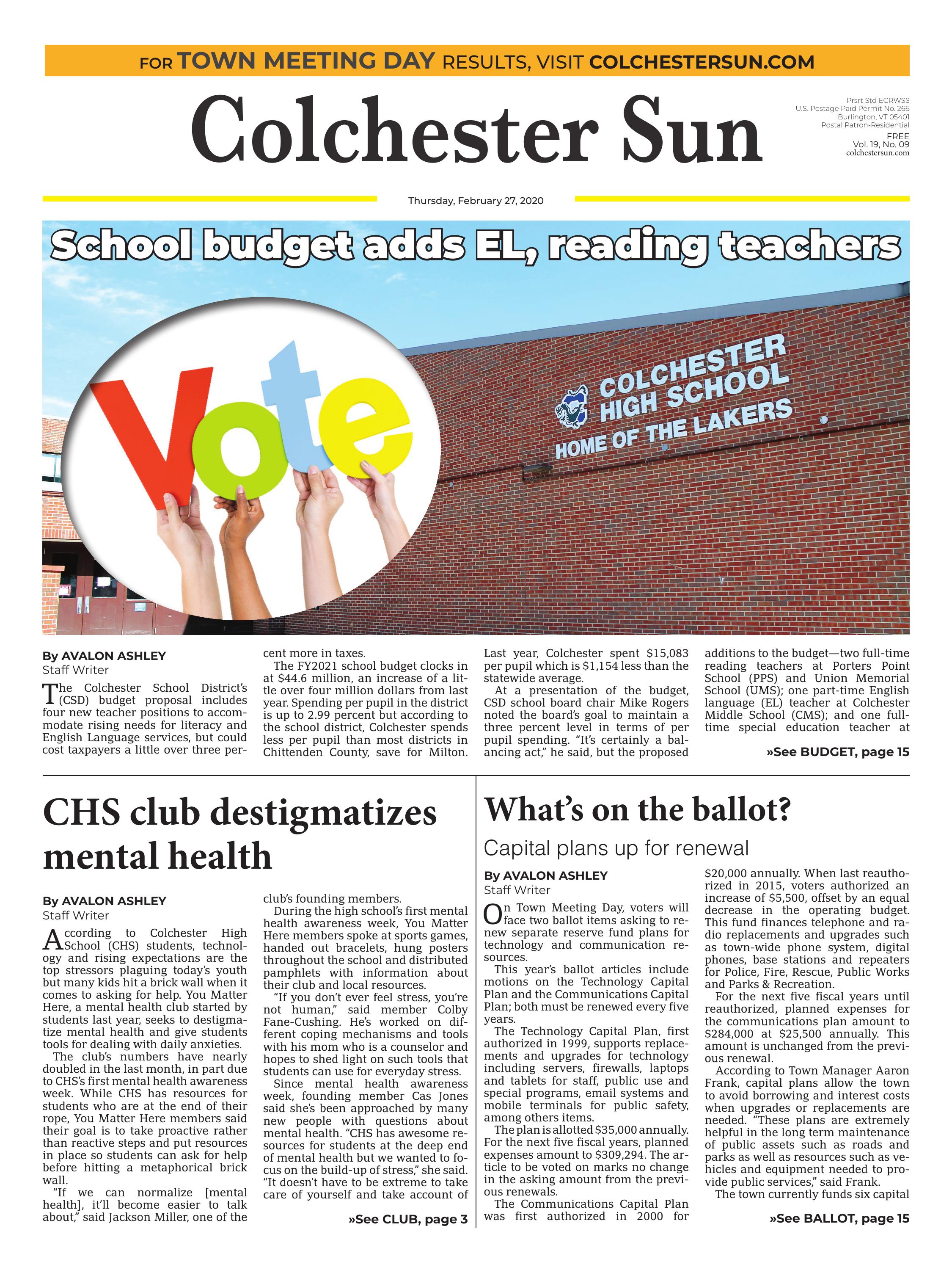 The FY2021 school budget clocks in at $44.6 million, an increase of a little over four million dollars from last year. Spending per pupil in the district is up to 2.99 percent but according to the school district, Colchester spends less per pupil than most districts in Chittenden County, save for Milton. Last year, Colchester spent $15,083 per pupil which is $1,154 less than the statewide average.

At a presentation of the budget, CSD school board chair Mike Rogers noted the board’s goal to maintain a three percent level in terms of per pupil spending. “It’s certainly a balancing act,” he said, but the proposed additions to the budget—two full-time reading teachers at Porters Point School (PPS) and Union Memorial School (UMS); one part-time English language (EL) teacher at Colchester Middle School (CMS); and one full-time special education teacher at CMS—are not a knee-jerk reaction. “There’s a long-standing need for those teachers,” Rogers said.

According to Superintendent Amy Minor, 59 percent of students in grades three to nine in Colchester are meeting literacy standards. “I want to see that number go up,” she said at the budget presentation.

While PPS and UMS have a few reading teachers in place, Minor noted that the schools don’t have enough staff to support students in kindergarten. “Our goal is to improve literacy skills for all of our students and to start young so that as students learn to read in grades K through three, they are then moving on and reading to learn in grades four and above. “If you’re talking about social studies and science content, you need to be strong reader to be able to move on,” she said.

Enrollment in the CSD is on the rise, somewhat in contrast to the rest of the state. “In the CSD we are really lucky to have students from all over the world,” school board member Lindsay Cox said at the presentation, explaining the budget addition of a part-time EL teacher at the middle school. While CMS currently staffs one part-time EL teacher for a 18 students, Cox said next year the number of students needing an EL teacher is expected to jump to 30—close to double the caseload.

Some of the other core drivers of the budget included changes to health care and student transportation. Healthcare benefits are proposed to be expanded to support staff such as cafeteria staff, aides, interventionists, and other non-teachers who work in the CSD. Approximately 77 percent of the total budget goes to employee salaries and benefits.

Rogers also noted that student transportation costs increased under the proposed FY21 budget, specifically due to bussing. “One of the conundrums that they have is finding bus drivers for the private sector,” he said.

Property taxes are expected to increase to 3.10 percent. For homeowners with a home valued at $300,000, this would mean an increase of $144 over the previous year.

Voting will take place from 7 a.m. to 7 p.m. at Colchester High School. Citizens can register to vote in person at the Town Clerk’s office, online at www.olvr.sec.state.vt.us, or at the polls on March 3. The full school budget is available on the CSD website.

According to Colchester High School (CHS) students, technology and rising expectations are the top stressors plaguing today’s youth but many kids hit a brick wall when it comes to asking for help. You Matter Here, a mental health club started by students last year, seeks to destigmatize mental health and give students tools for dealing with daily anxieties.

The club’s numbers have nearly doubled in the last month, in part due to CHS’s first mental health awareness week. While CHS has resources for students who are at the end of their rope, You Matter Here members said their goal is to take proactive rather than reactive steps and put resources in place so students can ask for help before hitting a metaphorical brick wall.

“If we can normalize [mental health], it’ll become easier to talk about,” said Jackson Miller, one of the club’s founding members.

During the high school’s first mental health awareness week, You Matter Here members spoke at sports games, handed out bracelets, hung posters throughout the school and distributed pamphlets with information about their club and local resources.

“If you don’t ever feel stress, you’re not human,” said member Colby Fane-Cushing. He’s worked on different coping mechanisms and tools with his mom who is a counselor and hopes to shed light on such tools that students can use for everyday stress.

Since mental health awareness week, founding member Cas Jones said she’s been approached by many new people with questions about mental health. “CHS has awesome resources for students at the deep end of mental health but we wanted to focus on the build-up of stress,” she said. “It doesn’t have to be extreme to take care of yourself and take account of your mental health.”

Students listed social media, homework, tests, college applications, extracurriculars and sports as some of the everyday anxieties they face.

“Everyone has some constant stressor,” said one of the club’s founding members Mitch Gadapee. Even if one student’s stress stems from sports and another’s stems from public speaking, Gadapee has noticed students have a lot more in common than differences.

“Social media creates far fetched expectations,” said Miller, pushing kids to hunt for likes and subscribers or compare themselves to unrealistic standards. Since kids are on their phones so often, Miller said the club made a list of apps that help with mental health as a counter to potentially harmful social media apps.

Gadapee agreed about how the effects of technology, recalling his experience coaching a team of first graders for Odyssey of the Mind and his surprise to find out six out of seven kids had a cell phone. “Kids are using technology younger and younger and we’re seeing the effects of that,” he said.

While Jones agreed that social media plays a large part in the rising tide of anxiety, she thinks it comes down to higher expectations across the board, from family to academic to social pressures. Gloria Kigonya, another founding member agreed. For her, the conversation has to change to reflect the current landscape.

“Our generation is exposed to so much more. Our approach to mental health has to change in proportion to that,” she said.

While the club members are still basking in the success of the high school’s first mental health awareness week, they are already looking to future projects such as community outreach, becoming involved with the middle school and painting positive quotes on CHS walls. Now that their club name and mission is out there, they can focus on spreading their message: “You’re not alone.”

This year’s ballot articles include motions on the Technology Capital Plan and the Communications Capital Plan; both must be renewed every five years.

The Technology Capital Plan, first authorized in 1999, supports replacements and upgrades for technology including servers, firewalls, laptops and tablets for staff, public use and special programs, email systems and mobile terminals for public safety, among others items.

The plan is allotted $35,000 annually. For the next five fiscal years, planned expenses amount to $309,294. The article to be voted on marks no change in the asking amount from the previous renewals.

The Communications Capital Plan was first authorized in 2000 for $20,000 annually. When last reauthorized in 2015, voters authorized an increase of $5,500, offset by an equal decrease in the operating budget. This fund finances telephone and radio replacements and upgrades such as town-wide phone system, digital phones, base stations and repeaters for Police, Fire, Rescue, Public Works and Parks & Recreation.

For the next five fiscal years until reauthorized, planned expenses for the communications plan amount to $284,000 at $25,500 annually. This amount is unchanged from the previous renewal.

According to Town Manager Aaron Frank, capital plans allow the town to avoid borrowing and interest costs when upgrades or replacements are needed. “These plans are extremely helpful in the long term maintenance of public assets such as roads and parks as well as resources such as vehicles and equipment needed to provide public services,” said Frank.

The town currently funds six capital reserve plans in addition to the communications and technology plan, including Transportation, Parks, Public Safety, and Vehicles, Facilities and Equipment.

The overall town budget for FY21 proposed is $12,121,084, an increase of total expenses by $1,665 over the current fiscal year. The budget increased funding for public safety services including weekday daytime firefighter positions and a contribution to the Howard Community Center social worker program. Town property taxes are estimated to increase by 1.02 percent over the prior year.

Town Meeting Day is on March 3 from 7 a.m. to 7 p.m. at Colchester High School. Sign-in begins at 6:30 p.m. at CHS on March 2, following a community dinner. Citizens can register to vote in person at the Town Clerk’s office, online at www.olvr.sec.state.vt.us, or at the polls.

Click and hold your mouse button on the page to select the area you wish to save or print. You can click and drag the clipping box to move it or click and drag in the bottom right corner to resize it. When you're happy with your selection, click the checkmark icon next to the clipping area to continue.