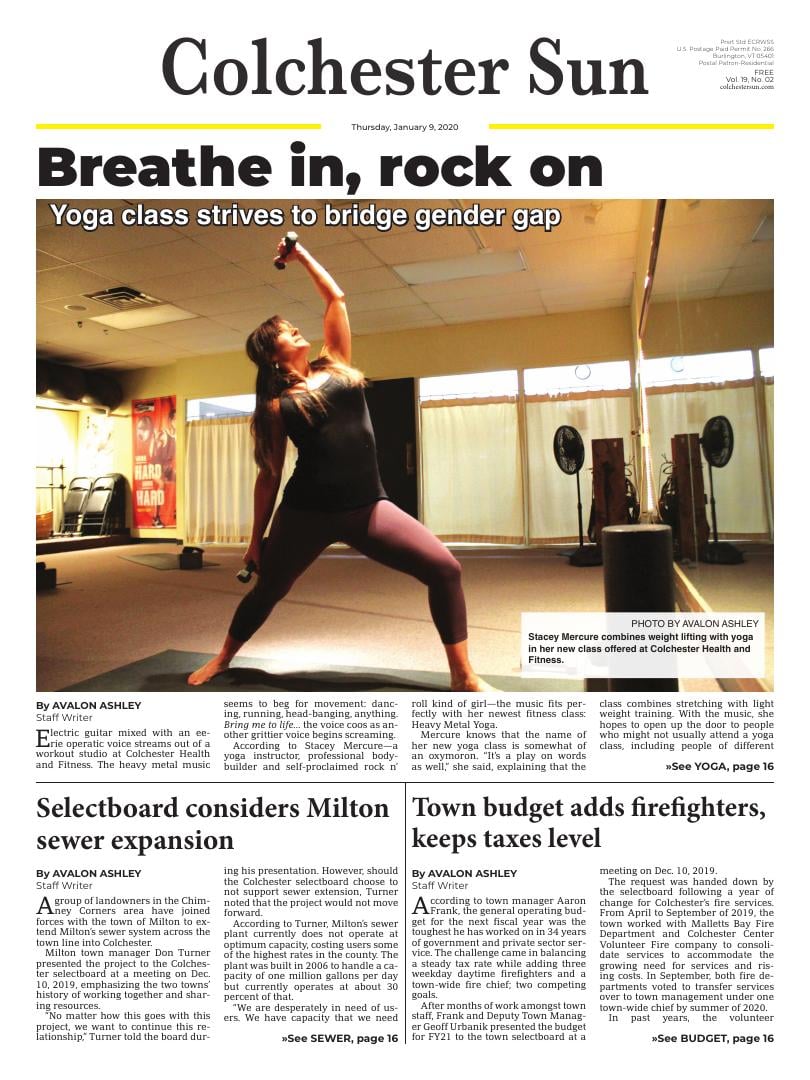 Electric guitar mixed with an eerie operatic voice streams out of a workout studio at Colchester Health and Fitness. The heavy metal music seems to beg for movement: dancing, running, head-banging, anything. Bring me to life... the voice coos as another grittier voice begins screaming.

Mercure knows that the name of her new yoga class is somewhat of an oxymoron. “It’s a play on words as well,” she said, explaining that the class combines stretching with light weight training. With the music, she hopes to open up the door to people who might not usually attend a yoga class, including people of different genders and ages.

“Walking into a gym can be intimidating. Walking into a yoga class is the same thing,” said Mercure, who feels that yoga can feel competitive and alienating for beginners and veterans alike. But stretching remains extremely important for all ages and bodies. To sidestep barriers like these, Mercure wanted to create a yoga class welcome to every body in an environment that breaks down intimidation and re-emphasizes the fun of fitness.

“Men might be more likely to stretch and feel comfortable if it’s a different environment,” she suggested, or if they’re listening to music they’re more familiar with.

But isn’t yoga supposed to be relaxing? “Some people relax with heavy metal, everyone’s different,” she said smiling.

The class includes light to medium weight training in the beginning combined with yoga postures. The first class is free for interested folks, as Mercure noted, she wants people to feel comfortable and feel like they’re not being judged in the space.

The idea behind the combo of yoga and weight-lifting began with shared heat. “When you lift weights, your muscles heat up,” explained Mercure. Stretching in yoga is the same idea. “That’s why yoga studios are heated, why massage therapists work your muscles; to heat them up.” Once the blood is pumping, you’re ready to work the muscles. “Heat in the body is key to warming up muscles,” she explained.

“We’re not reinventing anything,” she said. “Yoga is 5,000 years old, it’s gone through a lot of evolutions. This is a new spin.”

A group of landowners in the Chimney Corners area have joined forces with the town of Milton to extend Milton’s sewer system across the town line into Colchester.

Milton town manager Don Turner presented the project to the Colchester selectboard at a meeting on Dec. 10, 2019, emphasizing the two towns’ history of working together and sharing resources.

“No matter how this goes with this project, we want to continue this relationship,” Turner told the board during his presentation. However, should the Colchester selectboard choose to not support sewer extension, Turner noted that the project would not move forward.

According to Turner, Milton’s sewer plant currently does not operate at optimum capacity, costing users some of the highest rates in the county. The plant was built in 2006 to handle a capacity of one million gallons per day but currently operates at about 30 percent of that.

“We are desperately in need of users. We have capacity that we need to use. The plant is inefficient and it’s definitely not working the way we wanted,” said Turner. “We’re lucky to have a lot of capacity, many towns don’t have enough... But we aren’t even halfway to current capacity. Some people are paying heavily for it.”

The proposal to extend sewer was sparked when three Colchester landowners close to the town line began the process of land development, expressing their disappointment that a municipal sewer was unavailable yet only a mile away in Milton.

In the project proposal letter to the selectboard, Principal Engineer John Pitrowiski recalled bringing the inconvenience to Turner, who, “expressed an interest in the concept of adding users to Milton’s sewer system as the plant is currently not operating at optimum capacity.”

Turner told the selectboard that in addition to aiding Milton’s need for more users, the sewer expansion could catalyze growth opportunities for Colchester and solve the problem of aging wastewater systems. “A municipal option would be very attractive to other entities along route,” he said.

According to Turner, the private landowners would pay all of the costs for extending sewer service into Colchester and Milton would pay for legal and permitting fees accrued. A portion of the line would be forced main south of Exit 17, moving to gravity to the sewer plant.

While initial meetings with the Vt. Agency of Transportation (VTrans), the Act 250 District Coordinator, and the Regional Planning Commission regarding the project have gone well, Turner noted that, considering the history of pushback between Milton and the Conservation Law Foundation, the project may see some obstacles ahead.

Selectboard member Herb Downing questioned what Milton would do if Colchester rejected the sewer expansion. “[We’ll] continue to be creative and look at other alternatives,” answered Turner. “We’re not going forward unless Colchester is on board. Without your blessing and support it doesn’t matter.”

According to town manager Aaron Frank, the general operating budget for the next fiscal year was the toughest he has worked on in 34 years of government and private sector service. The challenge came in balancing a steady tax rate while adding three weekday daytime firefighters and a town-wide fire chief; two competing goals.

After months of work amongst town staff, Frank and Deputy Town Manager Geoff Urbanik presented the budget for FY21 to the town selectboard at a meeting on Dec. 10, 2019.

The request was handed down by the selectboard following a year of change for Colchester’s fire services. From April to September of 2019, the town worked with Malletts Bay Fire Department and Colchester Center Volunteer Fire company to consolidate services to accommodate the growing need for services and rising costs. In September, both fire departments voted to transfer services over to town management under one town-wide chief by summer of 2020.

In past years, the volunteer departments petitioned the selectboard to hire more weekday daytime firefighters to fill the need when volunteers are unavailable. Fire services currently has 90 volunteers.

The selectboard also requested that town staff do their best to keep the tax rate, “no higher than normal,” recalled Frank.

“This budget is slightly better than last year’s,” said Urbanik.

He explained that hiring weekday firefighters, funding additional emergency dispatch employees, and the expected increase in contribution to the Howard Community Center social worker program, were the main challenges to the budget. Forty-four percent of the town budget is allocated for public safety meaning police, fire, rescue, EMS, dispatch, and other services.

He noted that property value in Colchester increased of about 1.18 percent, largely due to permitted construction value, subdivision plats that have been approved, and improvements to buildings and residences. Colchester has the third lowest property taxes per resident in Inner Chittenden County towns at $673; Williston is first at $546 and Essex Town is second at $618.

Selectboard member Herb Downing commended town staff’s work on the budget, especially in light of the town’s new responsibilities and added costs for fire services. “We’re doing a remarkable thing... The main focus of the town should be to get the unified fire department up and running,” he said.

A town-wide hearing will be held on Jan. 14 for the public to comment on the budget. It will be put to a vote on March 3, Town Meeting Day. 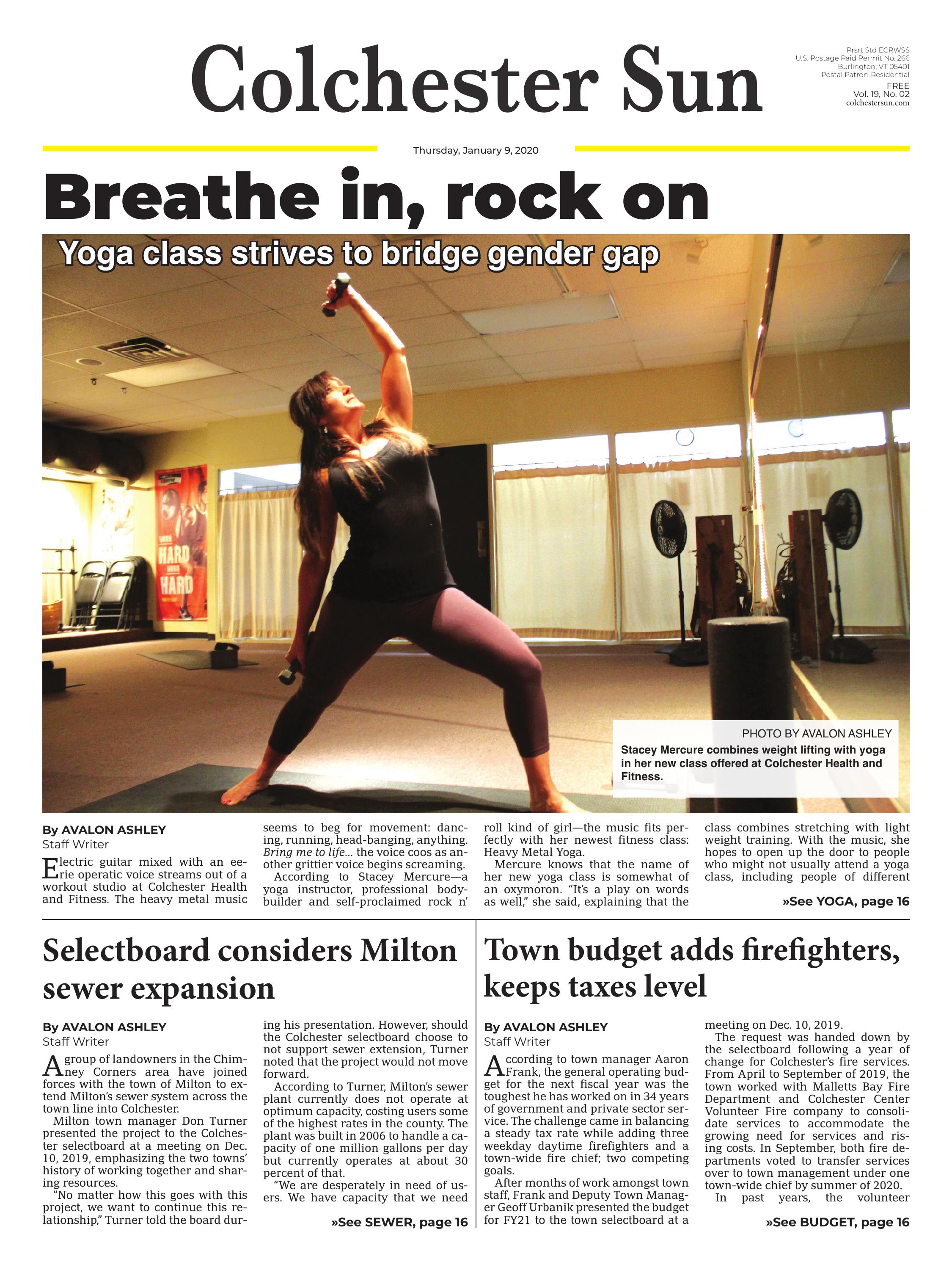