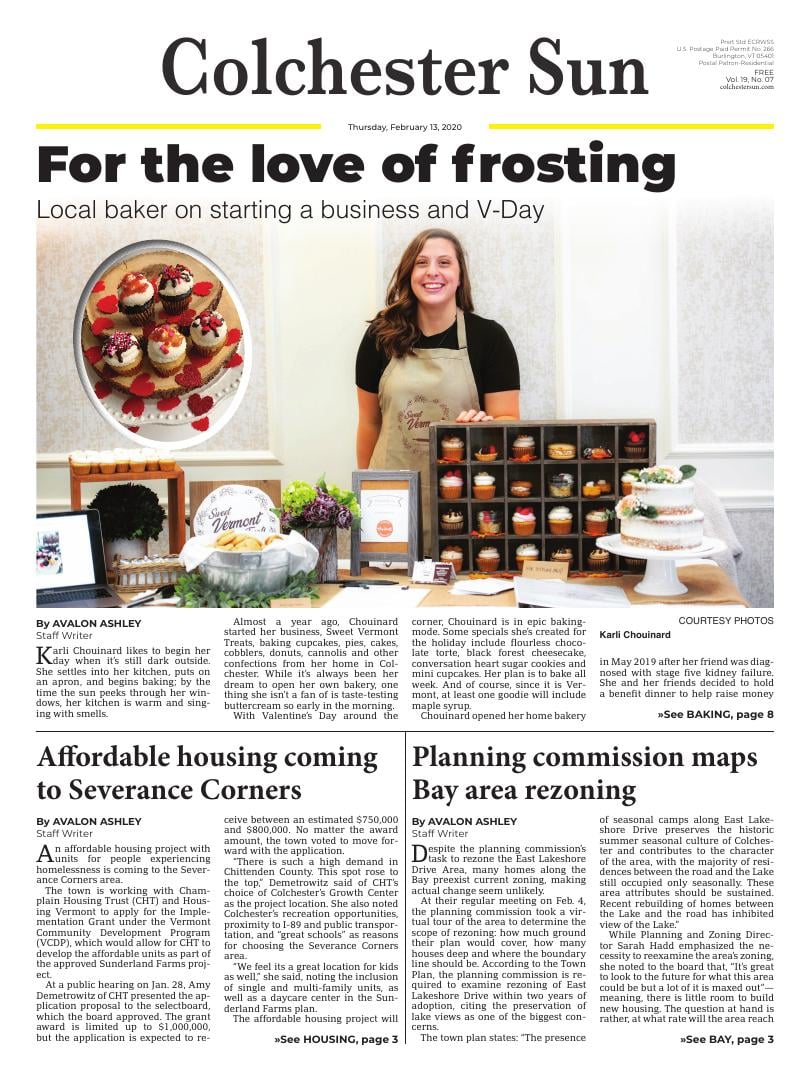 Karli Chouinard likes to begin her day when it’s still dark outside. She settles into her kitchen, puts on an apron, and begins baking; by the time the sun peeks through her windows, her kitchen is warm and singing with smells.

Almost a year ago, Chouinard started her business, Sweet Vermont Treats, baking cupcakes, pies, cakes, cobblers, donuts, cannolis and other confections from her home in Colchester. While it’s always been her dream to open her own bakery, one thing she isn’t a fan of is taste-testing buttercream so early in the morning. 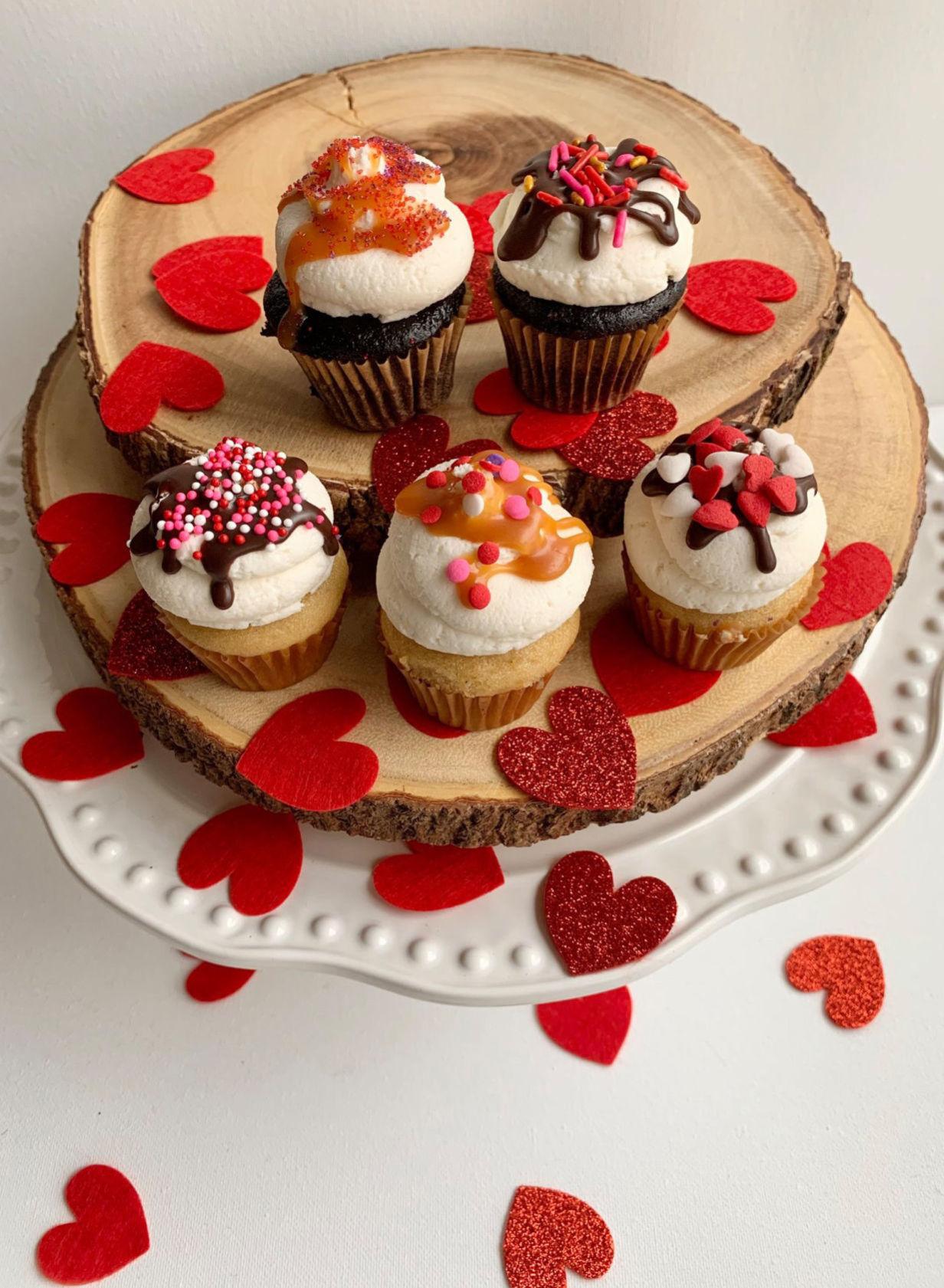 With Valentine’s Day around the corner, Chouinard is in epic baking-mode. Some specials she’s created for the holiday include flourless chocolate torte, black forest cheesecake, conversation heart sugar cookies and mini cupcakes. Her plan is to bake all week. And of course, since it is Vermont, at least one goodie will include maple syrup.

Chouinard opened her home bakery in May 2019 after her friend was diagnosed with stage five kidney failure. She and her friends decided to hold a benefit dinner to help raise money for his treatment, and her friends suggested Chouinard make all of the desserts.

“I was in kind of a weird spot with my job and everyone knew I wanted to do this,” she recalled. They suggested she launch her business at the event. Soon after the benefit, her friend found a kidney donor and Chouinard dove into running her home bakery.

At 24, Chouinard is very conscious of how young she is to have her own business, especially considering many of her clients include brides shopping for their wedding menus.

“Your 20s are such a weird time,” she said. Many of her friends are in different places in their careers and can’t necessarily relate to Chouinard’s venture. Instead, she’s enjoyed connecting with her dad, who ran his own business as a mason for 35 years. “He understands what it’s like,” she said.

Chouinard said she hadn’t planned on returning home to Vermont after college, but something about the Green Mountain State called her home. “Every time I go somewhere else, I appreciate coming back more,” she said. “Sometimes you have to go explore other places to appreciate your hometown.”

Much of her clientele Chouinard’s gained through social media and word of mouth. According to her, part of Vermont’s charm and why she has been successful is due to the people.

“Everyone is so real and I’m amazed at how supportive people are,” she said, in terms of clients and fellow bakers she’s met in the last year. Social media has played a large role in her success as a small business, both in spreading the word and establishing herself.

“There are a lot of home bakeries. Everyone’s kind of different,” she said. As far as her own marketing strategy goes, Chouinard believes in creating a strong media presence. “It’s important to me to have quality content. I think it sets you apart,” she said.

Another important avenue Chouinard has used to meet clients is by attending bridal shows.

How does she describe a bridal show? “Craziness,” Chouinard said. After opening her business last spring, she attended two bridal shows where she set up a table displaying her treats, alongside dozens of other vendors. Her main goal was to meet potential clients. 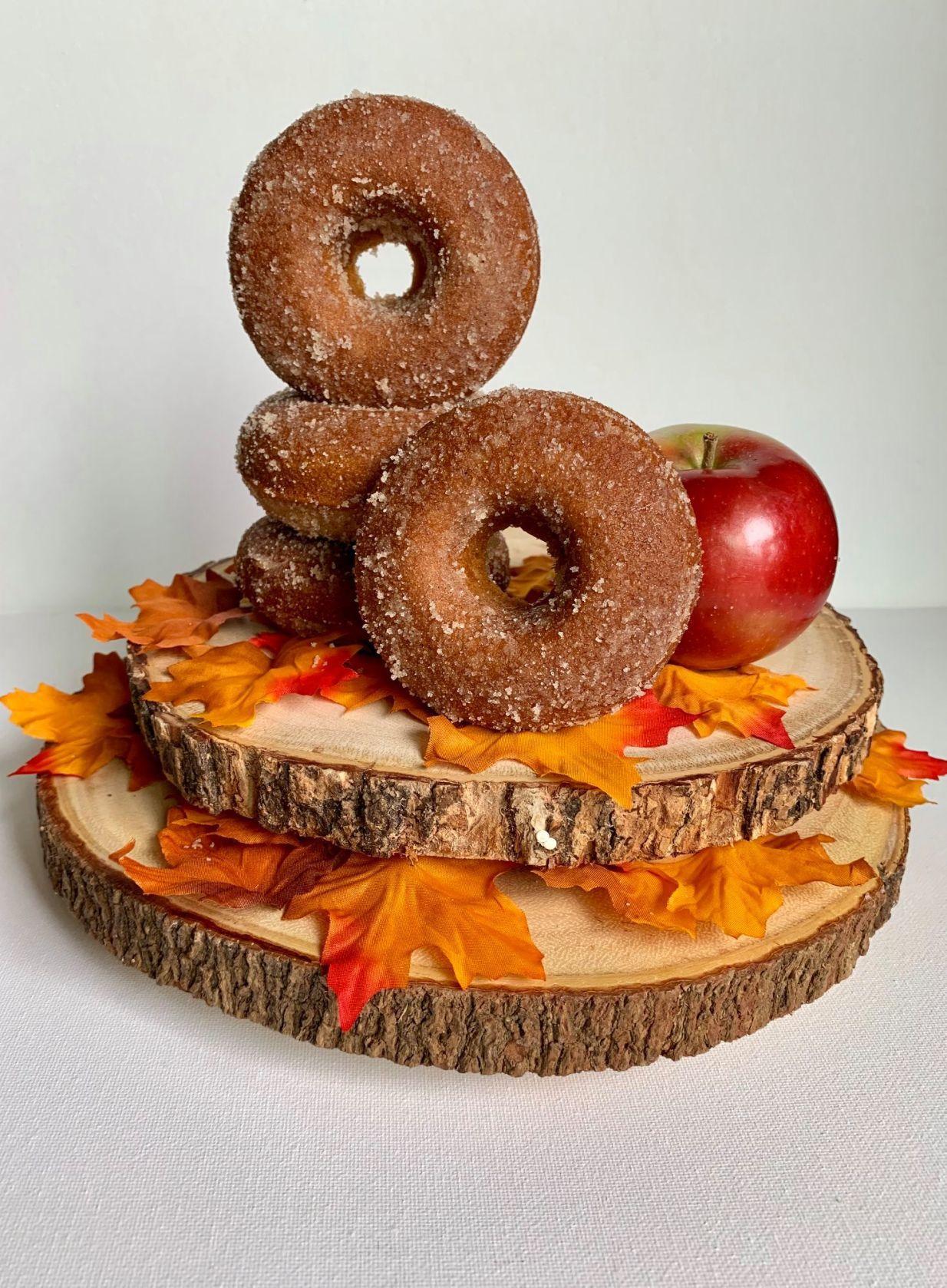 “The first [show] I was not prepared for the flood of people. It’s overwhelming,” she said. The event was three hours long but Chouinard remembered it happening all at once, in a blur—it felt like there were 100 people at her table all asking questions at once.

“It was worth it though,” she said. That mass of people turned into 100 leads. Plus, her wingwoman was there to help field questions and juggle the flood of brides: her mom. While Chouinard runs the business on her own—both the baking and the books—she often bounces recipes and ideas off her mom. “[She] is my best friend and one of my mentors,” said Chouinard.

Since her first show, Chouinard is much more confident. She’s also braved the holiday season, one of her busiest times, and recently partnered with local sugaring business, Graham Farms Maple, for a series of maple themed goodies. Lately, she’s enjoyed baking with espresso and chocolate, balancing bitter with sweet, and she’s always a little partial to a maple-bacon combo.

Chouinard’s passion for baking didn’t blossom out of growing up in the kitchen, she explained; no one in her family is much into baking or cooking. Rather, she fell in love with it on her own.

“I love giving someone something I’ve baked and seeing their face light up. It warms my heart,” said Chouinard.

But despite her claim that no one in her family is an avid baker, many close to her seem to have a special place in her baking. Her mom has helped at bridal shows; her dad understands the ups and downs of running a business; and her brother also works in the food industry. Now the dream is to someday run a cafe together where he can serve coffee and she can bake sweet Vermont treats.

For more information about Karli Chouinard and her bakery, Sweet Vermont Treats, visit her on Facebook at www.facebook.com/sweetvermonttreats, on Instagram @sweetvttreats, or at her next Bridal Show on Feb. 23 at the DoubleTree in Burlington.

An affordable housing project with units for people experiencing homelessness is coming to the Severance Corners area.

The town is working with Champlain Housing Trust (CHT) and Housing Vermont to apply for the Implementation Grant under the Vermont Community Development Program (VCDP), which would allow for CHT to develop the affordable units as part of the approved Sunderland Farms project.

At a public hearing on Jan. 28, Amy Demetrowitz of CHT presented the application proposal to the selectboard, which the board approved. The grant award is limited up to $1,000,000, but the application is expected to receive between an estimated $750,000 and $800,000. No matter the award amount, the town voted to move forward with the application.

“There is such a high demand in Chittenden County. This spot rose to the top,” Demetrowitz said of CHT’s choice of Colchester’s Growth Center as the project location. She also noted Colchester’s recreation opportunities, proximity to I-89 and public transportation, and “great schools” as reasons for choosing the Severance Corners area.

“We feel its a great location for kids as well,” she said, noting the inclusion of single and multi-family units, as well as a daycare center in the Sunderland Farms plan.

The affordable housing project will develop a four-story apartment building with 36 new units; seven will be reserved for households experiencing homelessness; eight set aside as “market rate”; 28 will be tax credit units; and 11 will be affordable to households at 50 percent of Area Median Income. Two of the units will be fully ADA compliant, one unit will include audio-visual accessibility, and the building will be served by an elevator. The plan also includes an open space trail and a small picnic area leading to trail heads.

The units will be served by municipal water and sewer like the rest of the Growth Center and stormwater will be handled on-site.

According to the application, a shortage of affordable housing in Chittenden County continues to negatively impact the region, from economic development to public health. About 55 percent of renters pay more than 30 percent of their income for rent and utilities, and nearly 30 percent spend more than half of their income on housing.

To afford an average two-bedroom apartment, a household in Chittenden County would need an annual income of $53,680, at a wage of $25.61 per hour, in order to spend less than 30 percent of income on rent and utilities.

That wage is more than two and a half times the current state minimum wage, which the senate recently approved to raise just short of a dollar by 2021. However, the Governor vetoed the bill on Feb. 10.

To secure the VCDP grant, the town must apply on behalf of the project. If awarded, they will then grant the funds to CHT—”no more federal or state strings attached,” confirmed Town Manager Aaron Frank. The grant application and fund transfer will be at no cost to taxpayers, but may impact town staff administrative duties.

The affordable housing project is included in S.D. Ireland’s Sunderland Farms development on the south-east corner of Severance Corners. At the public hearing, Demetrowitz noted CHT hoped to break ground on the project in September.

At their regular meeting on Feb. 4, the planning commission took a virtual tour of the area to determine the scope of rezoning: how much ground their plan would cover, how many houses deep and where the boundary line should be. According to the Town Plan, the planning commission is required to examine rezoning of East Lakeshore Drive within two years of adoption, citing the preservation of lake views as one of the biggest concerns.

The town plan states: “The presence of seasonal camps along East Lakeshore Drive preserves the historic summer seasonal culture of Colchester and contributes to the character of the area, with the majority of residences between the road and the Lake still occupied only seasonally. These area attributes should be sustained. Recent rebuilding of homes between the Lake and the road has inhibited view of the Lake.”

While Planning and Zoning Director Sarah Hadd emphasized the necessity to reexamine the area’s zoning, she noted to the board that, “It’s great to look to the future for what this area could be but a lot of it is maxed out”—meaning, there is little room to build new housing. The question at hand is rather, at what rate will the area reach full build-out.

Much of the meeting meticulously led commissioners on a Google Earth tour of the neighborhood, outlining areas with condos, pre-existing nonconforming structures, new and old houses, seasonals versus year-round houses, and more. Many of the units, Hadd pointed out, have vested rights, meaning if they were built before current zoning then they are not required to change when new zoning is put in place. That same idea transfers to houses that were torn down, like numerous lots in the area owned by Mongeon Bay Properties—remnants of a lawsuit in 2017 that rocked the town and pushed nearly 25 people out of their homes. Mongeon Bay has a right to rebuild those demolished homes.

“A lot of looking at the future of East Lakeshore Drive is going to be determined by what’s already there,” said Hadd.

One of the ways she suggested working around this sticking point is to create incentives for current property-owners to bring their units up to code. “What incentives are you going to give these people to redevelop?” she asked. When rezoning West Lakeshore Drive a few years ago, she recalled that the board “wanted to give people some carrots to restore parts of their property,” more in line with zoning.

Looking forward to the next meeting, board members expressed desires to examine transportation in the area, stormwater, height ordinances and scenario planning. 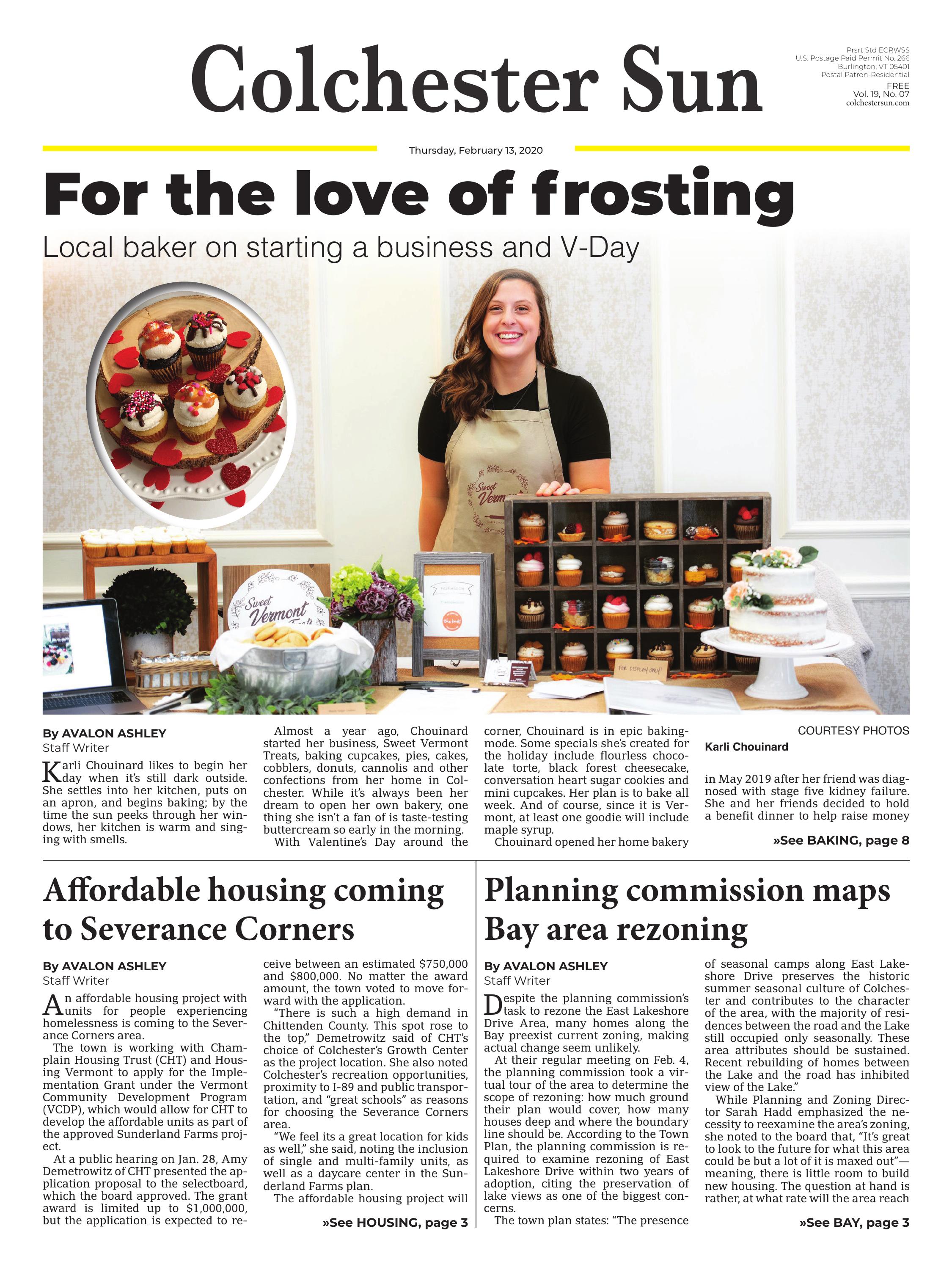