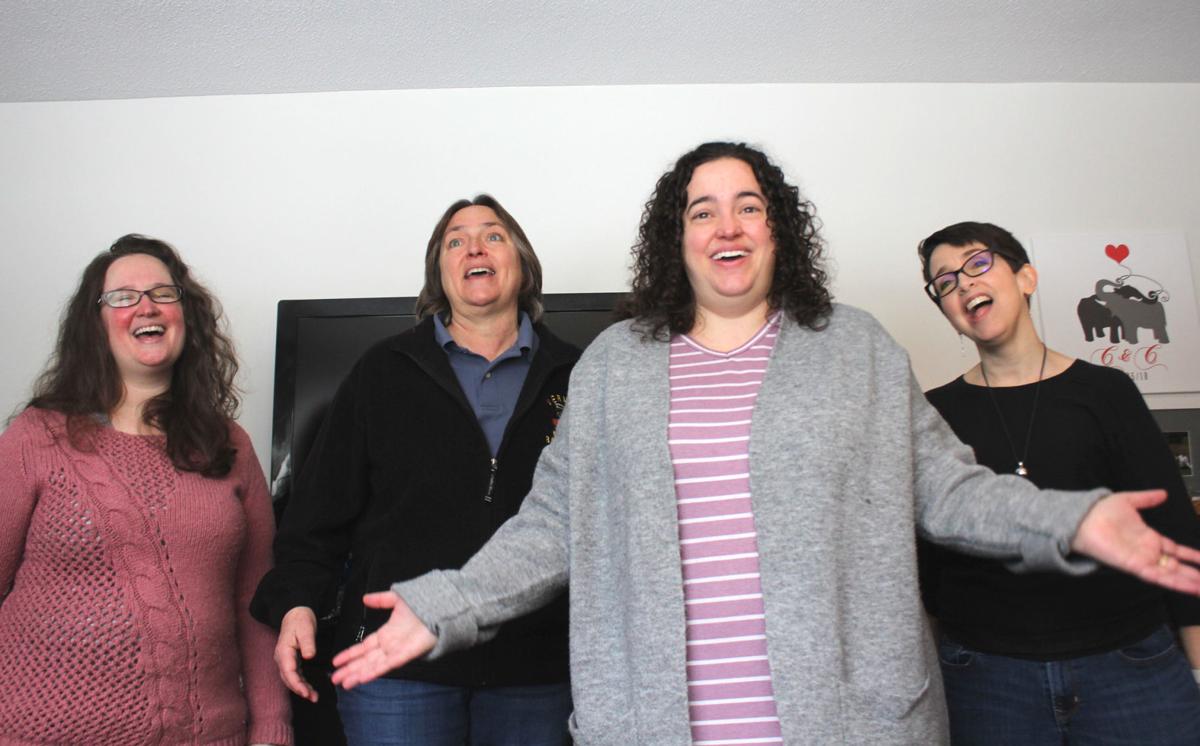 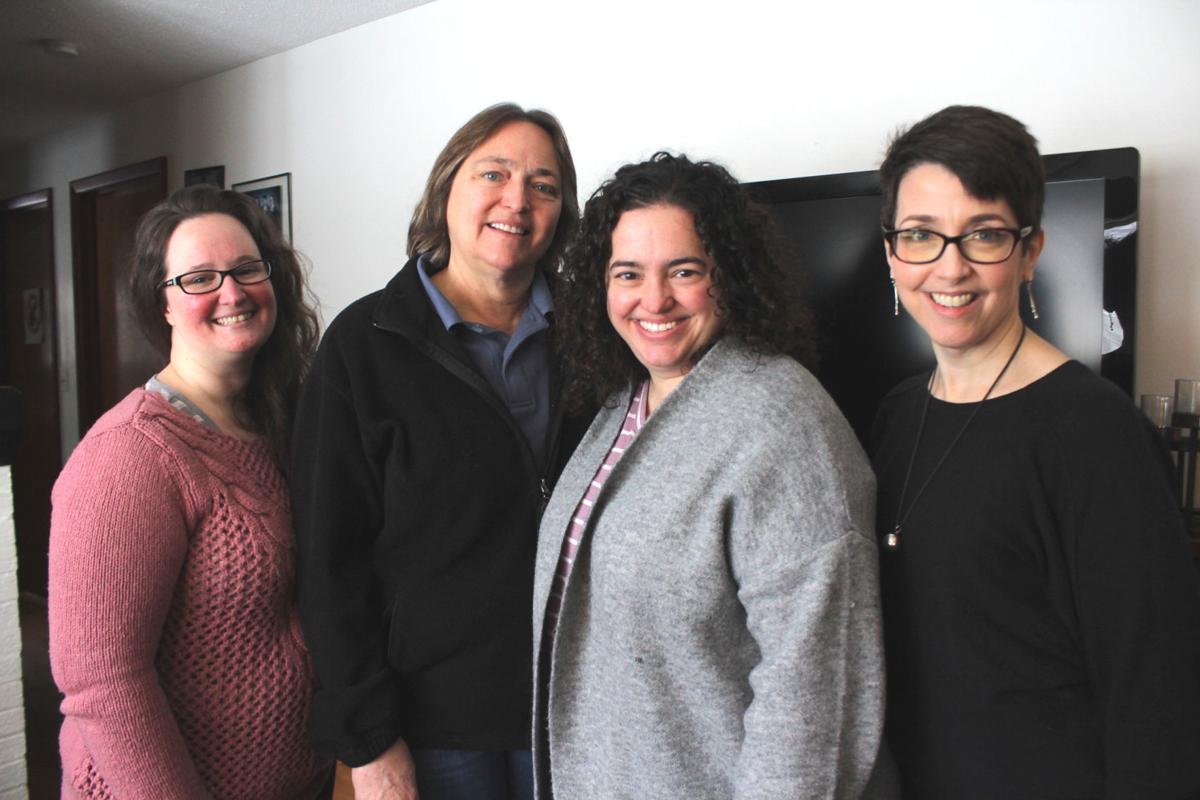 Carol Hollenbeck sells boxes by day; every other minute she can spare, she’s singing. When she’s in a bad mood, anything from Disney’s Frozen works. Otherwise, it’s all about barbershop.

Hollenbeck sings bass in UpScale, a local women’s acapella quartet singing in the barbershop style who have been together for seven years. UpScale won first place at Colchester’s Got Talent competition in 2018 with an acapella rendition of, “Titanium,” by David Guetta and won second place last year. The quartet was invited to return for a third time as All Stars, this year’s theme, and they hope to win back the first place title.

The other three ladies instrumental to the quartet include April Knight who sings tenor, the highest voice part; Carolynn O’Donnell who sings lead; and Trecia Pallman-Hamilton who sings baritone, or, “all the notes that are tragically accidental,” Pallman-Hamilton said, eliciting bubbles of laughter from the other members.

“It’s like we’re just standing in our spots and she’s doing twist around us,” Knight said to describe the baritone part. Hollenbeck sings bass, the lowest voice part, also thought of as the other lead.

Barbershop style is sung in four parts with consonant harmony, meaning that singers line up the chords at the same time to create overtones. “You try not to spread it too much... so the sound is nice and lush,” Hollenbeck explained. “The goal is to create an overtone the whole time so even though it’s only four people, it sounds like 20. It’s an amazing feat.” Acapella differs in the number of parts and in style; while all four parts sing the lyrics in barbershop, acapella singers often feature a lead singer on lyrics with the other voices singing background parts.

The members of UpScale first met through Vermont women’s acapella barbershop chorus, the Barretones and began singing as a quartet in 2014.

“I saw an ad in the newspaper. After college there’s not a lot of opportunities to sing in groups,” Knight remembered. She grew up playing instruments and singing in choirs in school but didn’t have much prior experience with barbershop music.

Pallman-Hamilton’s background is all music and theater. She described herself as a “reformed music teacher,” who grew up playing instruments and singing with her siblings.

Hollenbeck, who directs the Barretones, has been singing her whole life but was introduced to barbershop in college.

“There was a men’s group that would rehearse in the common area. One day I was walking by them and it sounded like a hollow chord. I said, ‘Are you missing a part?’” Hollenbeck recalled. The group was missing a tenor, the high harmony, and she ended up filling in. After that, she was hooked.

O’Donnell grew up singing in church and school choirs, but ultimately sought it out for herself. “It wasn’t because anyone in my family was doing it. I just always liked to sing,” she said. Singing lead in the quartet is a new challenge for her—not technically, but in terms of performance.

“As the lead, I have to be able to emote in a believable way,” she explained. “For me it’s definitely hard. I don’t have a background in acting or even as a soloist because I’ve always sung in choirs. This is really the first time I’ve had to step out and try to be more emotive without being hokey.”

One of the newer categories introduced in barbershop competitions within their organization, Harmony Inc., is “performance.” The category defines performance as being, “realistic in imaginary circumstances.” The group often discusses performance and how to emote authentically during bi-monthly rehearsals and voice lessons.

Some quartets thrive off of the cheese-factor however, incorporating comedy into their quartet personality. According to the ladies, every quartet has a personality, often determining song choice, costumes and stage presence.

While the members of UpScale aren’t sure what their quartet personality is quite yet, they know they want to come across as light-hearted. “We’re not a comedy quartet, but we like to have fun with it,” offered Knight. Many of their songs feel upbeat, even romantic, without veering too far into ballad territory.

There are three main barbershop organizations in the US. Barbershop Harmony Society (BHS), historically known as the Society for the Preservation and Encouragement of Barber Shop Quartet Singing in America, Inc., was established in 1938 as one of the first organizations to preserve barbershop music. Initially, membership was reserved for men but as the scene has grown, BHS opened their doors to include, “everyone in harmony,” according to Hellenbeck. Women’s barbershop organization, the Sweet Adelines International was established in 1945 as a counterpart to BHS, and Harmony Inc., which the members of UpScale belong to, was established about 60 years ago and includes much of the east coast.

“[Harmony Inc.] came about because there was a lot of inequality going on in the music world,” in terms of racism and gender inequality, explained Hellenbeck. In the last 20 years, BHS has opened up their competitions to mixed quartets and much of the music has changed.

“If you’re only singing one genre of music, you’re singing to a very narrow audience,” she said. “You want to make sure what you’re singing really encompasses everyone, so everyone is included... It’s not necessarily the picture of the old barbershop with the hats and mustaches anymore.”

The other ladies agreed, noting how they work well together because of their web of support.

“We’re putting our hearts out there, if we’re doing it right. When you’re singing you’re very vulnerable so it’s good to know someone is there to support you when you’re freaking out and thinking I can’t do this,” said Knight. Do the ladies wish they could sing full time? They’re unsure. But according to Trecia, what makes barbershop special, is that it doesn’t matter what you do during the day.

“What brings you all together is the music you perform together. Doctors and garage attendants can sing together and what they do during the day doesn’t matter,” she said.

UpScale will be performing, “Go The Distance,” from Disney’s Hercules at this year’s Colchester’s Got Talent: All Stars show on Friday, Jan. 31. To attend the show and other attractions at this year’s Winter Festival, bracelets can be purchased in advance at the Colchester Parks & Recreation Department, Burnham Memorial Library, Mazza’s General Store, and ACE Hardware.